The last weekend before school starts back again we are running another WILD ART session in the woods.

Wild Art is aimed at under 8's but is open to all, if you have older siblings that want to come they are welcome (and can always den build & explore!!)

BOOK NOW by emailing or ringing Louise at louise@woodlandplaycentre.co.uk or 07775 941353

Posted by Louise Kennedy at Monday, August 29, 2011 No comments: Links to this post

Woodland Playschemes can sometimes be hit and miss, with families trying to juggle in holidays and work during the school holidays. The Summer Holidays are nearly over and we are already thinking about the next holiday - OCTOBER HALF TERM!

Woodland Playschemes~ during the October half term will be on; Tuesday 25th, Wednesday 26th and Thursday 27th. 1000 - 1600hrs with the added option of an early bird and night owl drop off for those parents that are working. It feels like autumn is almost upon us, but we will be certainly getting up to some autumnal fun and games in the woods then!

So why not book up now?! 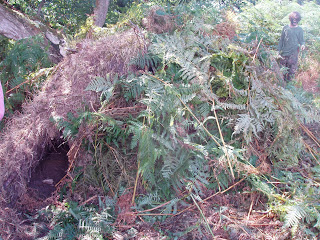 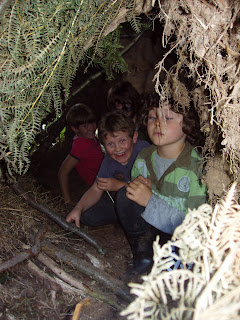 Yes...there were four lads in there!! 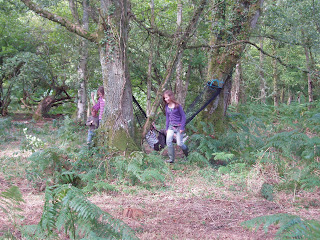 We do love the hammocks! 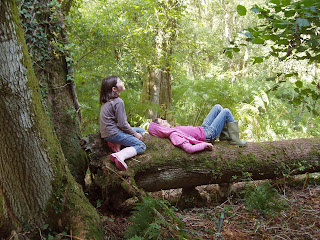 Delightful.....in the middle of a game of capture the flag, the defenders have time to sit and gaze up through the tree canopy & were talking about how fast the clouds were moving! Marvellous! 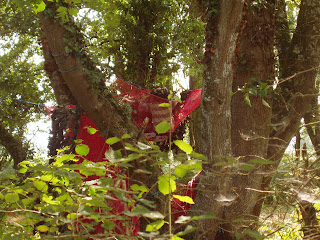 The best place to hang out....in the top net! 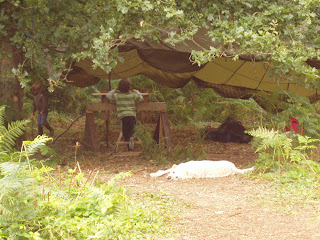 The Pole lathe in action again!And Woody....well what can we say....he really is just amazing & loves spending a day with us in the woods...especially if there are any sausages left over! 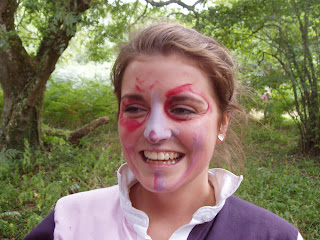 The lovely Harriet was honoured by having her face painted in order to join a 'team'....!! Megan & Jack found a young toad, we seem to be seeing lots at the moment. This one was risking life and limb around the camp, with an inquizitive terrier, interested labrador and children's feet!

We had a great day yesterday in the woods, with some amazing dens.

To book onto the October half term's playscheme. Contact Louise on 07775 941353 or email her at louise@woodlandplaycentre.co.uk
Posted by Louise Kennedy at Thursday, August 25, 2011 No comments: Links to this post

Yesterday was the first of the three planned Wild Art sessions with Creation Station in Pixies Wood. With a group of young people ranging from 6 weeks old to 8 years old (plus two teenage fire lighting and whittling helpers!!), it was a fun filled morning exploring, finding, collecting, creating, lighting fires and of course all rounded off with the celebratory toasting marshmallows in the fire! It was a great turn out with many new families coming to the woods...once they found us! Ali (from Creation Station) and Louise really enjoyed the morning, thought it went very well and loved meeting new people. It was super that so many of families stayed and had a picnic in the woods too. 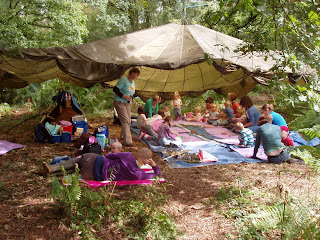 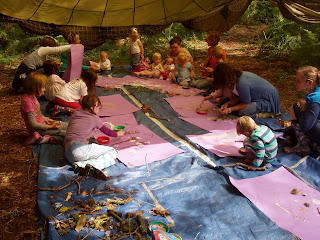 All gathered under the canopy for some Wild Art! 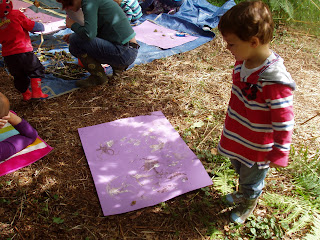 The next dates for the Wild Art sessions are SATURDAY 3RD SEPTEMBER AND FRIDAY 30TH SEPTEMBER from 1000 - 1200non, again please do bring a picnic and enjoy the woods until 1300hrs.

Book now for both dates by ringing Louise on 07775 941353 or emailing her at louise@woodlandplaycentre.co.uk
£12 per child, £8 for the second sibling
MUST BE BOOKED IN ADVANCE

Wild Art is aimed at the under 8's but any age is welcome. Older siblings are always welcome to come and play in the woods! 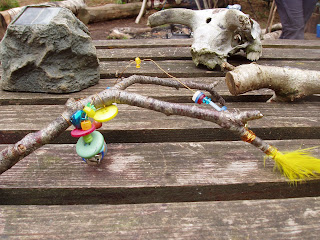 Posted by Louise Kennedy at Saturday, August 20, 2011 2 comments: Links to this post

Kilve Court Outdoor Centre on a bivi in the woods!

The parachute Canopy from Endicotts in Exeter, housing the pole lathe borrowed from Tim. I love sitting under the canopy as it gentle billows in the wind.

The bivi's made by the youngersters for last nights adevnture. Loving the instructors hammock!!

These girls we warm, dry and cosy all night!

The giggly girls in the far shelter, slept so well they even lay in i believe!!

Now we are talking....this was one instructors tent tipi! It looks amazing!! Wise move i think Dom to stay in that, with all the rain this morning! 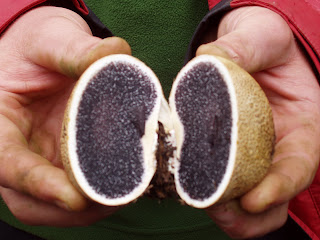 Found this morning....understand from a reliable friend that it is a type of puff ball, but NOT edible. Looked amazing though, the shape and colour. Well found Andy (one of the instructors)! I also believe they did some great star gazing last night with the help of an "app"!!!?
Posted by Louise Kennedy at Thursday, August 18, 2011 No comments: Links to this post

Two Compost Loo's, a boys loo and hand washing facility with harvested rain water....we are going up in the world!
Posted by Louise Kennedy at Thursday, August 18, 2011 No comments: Links to this post 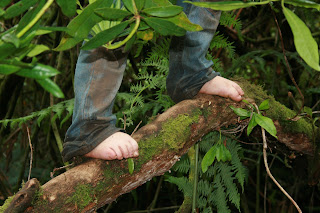 The Woodland Play Centre is featured in this autumn's issue of Exmoor The Country Magazine (www.theexmoormagazine.com).  The three-page feature includes lots of pictures, including shots by Christina Dithmar and Fiona Crawford and information about what’s going on down in the woods. The magazine is available now in the shops, with stockists closest to Crowcombe including Crowcombe Village Shop, Davies Newsagents in Williton and both Co-ops in Watchet.

Here is a small taster of the article, which is written by Mel Roach...

It was on a bright June day that I drove to Crowcombe Heathfield, through colonnades of majestic beeches, past the sleepy little railway station, to the Woodland Play Centre where owner and qualified environmental play worker Louise Kennedy has been tackling the problem of giving the outdoors back to our children.  For over ten years Louise has run various outdoor and woodland playschemes with the central aim of enabling children to play freely in a natural environment.

I parked in a small stoned area by the road and entered the woods.  Past limbering birches and flourishing rhododendrons, the first sign of life I spied was a structure made from hazel poles, a small shelter, built by and for a small person no doubt.  Around the corner, remnants of a bow and arrow lay on the ground and then, wafting over the breeze, along with the vibrant sounds of children playing, I detected the hearty and welcoming smell of sausages being cooked on an open fire.

“I can see a lady!” murmured a small boy from a hidden place in the shade.  “Hello?” I called out and, rounding a large oak tree, I arrived upon a base camp of sorts.  The half-term playscheme was in full swing....
Posted by Louise Kennedy at Wednesday, August 17, 2011 No comments: Links to this post

Favourites of the Woodland Play Centre